Personal view: ‘Hatfields and McCoys’ The feud that killed many 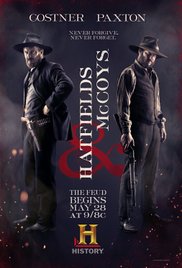 The show ‘Hatfields and McCoys’ is a history channel miniseries that aired in 2012. Eventually Netflix picked the show up later that year. The show only has one season with three episodes that last from 1 hour and 30 minutes to 2 hours give or take. Overall the show is well liked by the audience and because of that got a 4.5 out of 5 stars on Netflix.

The show is based upon real events that happened between two families during the Civil War. Both of the families lived in the South and both fought for the Confederacy.

The show is very gruesome and shows a resemblance to what it was like in the south at that time. The show only takes the course of a couple of months but the actual feud lasted over 28 years from 1863 to 1891. Because the feud was so popular, people would pick a side and then fight with that family. In the show about fifty or so people die but in real life only fifteen people died. Even though there is a lot of dramatization in the show, it does resemble the events that took place between the two families.

Even though the show got high ratings, it did not have a big fan base. “I’ve heard good things about the show so if I have the time I would consider giving it a try,” said Emmalee Prince, 8th grader.

The show is very addicting to watch because at the end of each of episode they give you a big cliffhanger so you want more. “I started watching it last night and I have to say it got me hooked on it,” said Prince.

At one time during the Civil War states in the North held slaves. “The setting and time period of the show sounds cool so I might watch it when I get home,” said Dillon Carney, 8th grader.

One of the only complaints with the show is that because it’s a miniseries it only has three episodes. “I would like there to be more episodes because it’s a really good show,” said Carney.