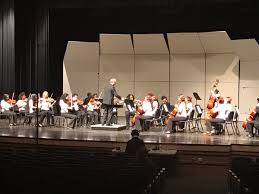 On March 1, 2017, UIL Orchestra was held at Steele High School with results varying from one to three. It featured different ensembles in and around San Antonio and New Braunfels, including the Dobie Jr. High orchestras. Many different music styles and pieces assigned by UIL were played for the judges. It was a unique experience for a lot of the orchestra students, while for some it was just an ordinary concert.

“This is my second time playing for UIL,” said Tivon Nguyen, 8th Grader. Nguyen plays the viola for the Dobie Philharmonic Orchestra. “My orchestra played ‘March of the Meistersingers’ and ‘Contredanse’,”said Nguyen.

“I played when it was the middle of school,” said Caleb Syverson, 8th Grader. He plays for the Symphonic Orchestra. “It was different than the 1st time I played back last year.”

During their performances, the orchestras had played with a few flaws. “We were playing fast in one of the pieces,” said Syverson. “I messed up on one of the music but I caught up with the orchestra.”

They also felt nervous. “Some of the pieces we played were a bit difficult, but we had enough practice so that we didn’t have to play really bad,” said Nguyen.

Scores were handed to the Orchestra teacher Mr. Lovelace just a few days after the performances. Many of the students felt positive and confident since they received good scores. “Last year, we got a bad score on our performance, but we’ve improved and got a better score,” said Mr. Lovelace while talking to his 2nd period Orchestra.