Can You Keep “A” Secret 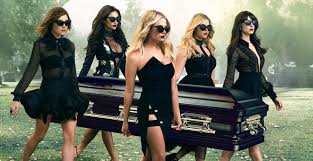 Pretty Little Liars is about five best friends; Alison, played by Sasha Pieterse, is the ringleader of the girls and head popular, Aria, played by Lucy Hale, is considered weird in her school and has a love relationship with teacher Ezra Fitz, played by Ian Harding, Hanna, played by Ashley Benson, wants to be like Alison and is always getting herself into trouble, Emily, played by Shay Mitchell, is a swimmer who admires Alison, Spencer, played by Troian Bellisario, is sophisticated and the smartest girl in her grade

These girls have been best friends since they were kids, then one summer when the girls are having a sleepover Alison disappears.

The girls eventually forget about her because they believe it is a joke (Alison jokes a lot) and they all go their separate ways.

Then one year later Alison’s dead body is found in her former backyard. The girls soon reconnect their friendship and try to solve Alison’s murder case. Each girl receives an anonymous text from a person with the name “A”.

“A” is threatening the girls with their darkest secrets. Mostly all of this drama happens in a small town in Rosewood, Pennsylvania.

“I started watching this last summer. I’m not a big fan of scary drama, but I was addicted from episode one. The characters are unbelievably interesting, and every little detail makes sense. It’s the kind of show that keeps you wishing you had more and more episodes available to watch. I never get tired of the suspense and I think that the show does a really good job of having their audience on their toes.” stated Rhyan Thompson, 8th grader.

“My favorite character would have to be Toby Cavanaugh. He’s my favorite because he is very loyal, especially to Spencer. He joined the “A” team to protect her, even though he had his own problems to worry about.” said Rhyan.

“The thing that makes me love this show so much is the jaw-dropping plot twists. One of the things that I am excited for the new season is the plot twists. I love them. I love how the show just isn’t all about murder and mystery, it’s also about what goes on in their lives too. said Thompson.

With watching all the episodes of the television series, I would not want to live the lives of the liars.

For example, when they were put in the dollhouse and were trapped in there and tortured, the outcome left them with scars. They were affected very much by it, and I would not want to go through something like that.