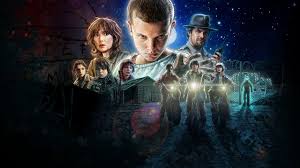 Stranger Things is a show about Eleven (Millie Bobby Brown), Mike (Finn Wolfhard), Dustin (Gaten Matarazzo), Lucas (Caleb Mclaughlin), and Will (Noah Schnapp) who embark on a journey to find the reason why Eleven has supernatural powers.

The story takes place in the year 1983 in a small town in Indiana named Hawkins. Eleven is an experiment of Hawkin’s Lab who tried to use her as a weapon against others.

Season two of the show will premiere on Halloween this year. “Im super psyched, I’ve been waiting so long for it to come out,” said Calla Perdue, 8th grader. The new season of the show has been long awaited but you can only see it on Netflix so you better get to it.

Overall, the storyline is great and if it weren’t for how it is to piece the things together and when you almost understand it, the story suddenly twists into a whole new direction. Season 1 was great and I’m ecstatic for season 2.