Get to know the Instructors of Kung Jung Mu Sul! 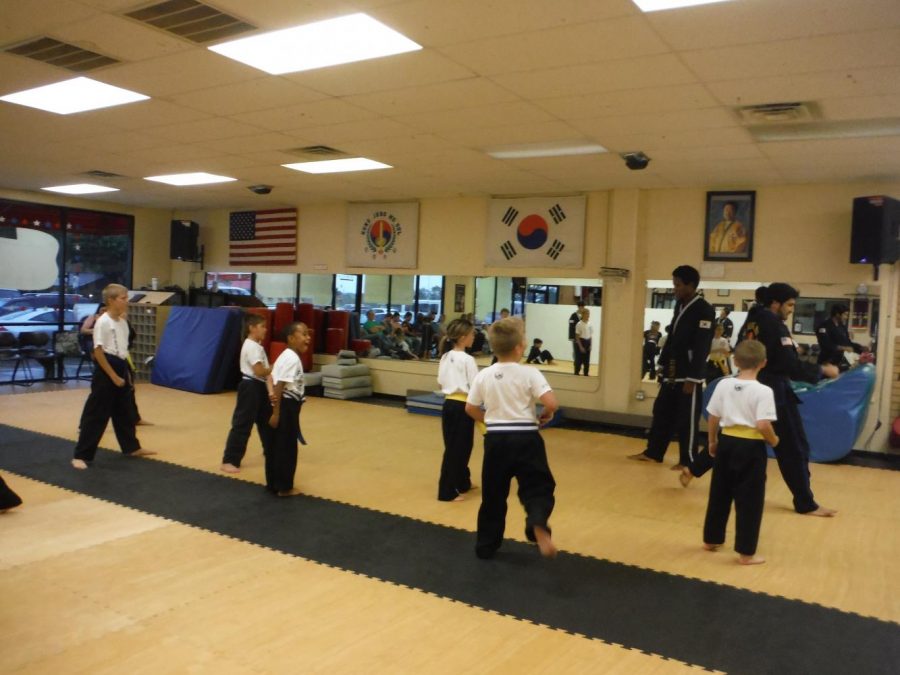 Ki yups could be heart at Kung Jung Mu Sul martial arts school from the beginner Dragons as I entered the dojo on September 27 , 2017.

Students were Mr. Myers, the head instructor of Kung Jung Mu Sul. The white belts and color belts were learning how to do their rolls.

Mr. Paul’s full name is Paul Marroquin, he is 22 years old (he likes to call himself a old man.) He is a Busabomym, otherwise known as a 3rd degree black belt. He will be testing for Sabomym (4th degree) this December. He fights dragon style, so a lot of legs. His favorite person to beat up during sparring is Sarah Wargo, a 13 year old, a 2nd degree black belt.

(Paul)A: “I get to hit people, you know, it’s mostly being able to apply what I learned to practical uses. It’s not why I started but, it developed to why I train.”

(Paul)A: “Teaching, mostly because more like, you know, sometimes these kids don’t get it, sometimes it’s hard to explain a concept you’ve done your entire life. Like for example, the first time I ever taught spin heel kick. I know how to do a spin heel kick, I know what it looks like, what it’s a spouse to look like. I don’t know, like how am I even going to start it, or front snap kick or round house kick. Then Mr. Myers showed me how to teach it step by step. It’s harder when you first start out, but me I’ve seen it all.”

Q: Do you think that one day you will be able to beat Mr.Myers in a fair fight?

(Paul)A: “Yes! Everybody should at least try it out. It’s one of the greatest things that’s happened in my life. It’s probably wouldn’t be the person I am today without martial arts. You know it’s a part of my life, it’s everything I am.”

Mr. Trae’s full name is Deontrae Vincent Wood, he is also 22 years old. He is a Kyosamym, otherwise known as a 2nd degree black belt. He will be testing for Busabomym (3rd degree) in December of 2019. He prefers to his hands but he’s getting into using his feet more in sparring. His favorite during person to beat up is Renee Jessen, so me. A 13 year old senior red belt.

(Trae)A: “Getting beat up, because it makes me get better, and so I don’t get beat up in the future.”

(Trae)A: “Teaching the curriculum,because you can do it, but then you have to break it down for people who don’t know how to do it. Putting it into the simplest terms.”

Q: Do you think that one day you will be able to beat Mr.Myers in a fair fight?

(Trae)A: “Uh, yep cause he’ll get older and it’ll be harder for him to move. I’ll get older, but I guess that’s not fair because he’s old and can’t move. Actually, uh, I run into him, I’m faster than him as is, but I still get beat down.”

(Trae)A: “Yes, I truly think everybody should join martial arts.”

Mr. Myers full name is Ted Myers, he is 40 years old (He likes to say he is 100, but he really does look it though). He is the head instructor of Kung Jung Mu Sul. He is a Sabomym other wise known as a 4th degree black. He will be testing in December next year. His fighting style is crane and  tiger. He draws people in and then attacks them, but he’s a natural attacker. He learned how to be a crane because he was getting slower and it’s easier on his body.

(Myers)A: “I love it. Best thing I’ve ever done. It’s almost like a real job, except I get to go to work barefoot, on padded floors, and in pajamas. And I get to tell other people’s kids what to do. It’s good fun.”

(Myers)A: I love when people actually put things together. When they realise when they’re not going in swinging at each other, that their in control of the match. And that if they can control it, they can win. That’s my favorite part of sparring.

(Myers)A: “Living in a military community, falling in love with all of our students, watching them grow and become amazing, and then watching leave. It’s brutal, cause not like regular school teachers. Where they have them for a year, we have them for years.And then they have to leave because the military moves them away”

Q: Who do you expect to beat you one day?

(Myers)A: Everybody. I expect everybody to. I hope everybody is physically and mentally able to beat me at sometime.